Hanna and other Happenings

We survived Hanna but not completely unscathed... can you believe that??? At about 7:30 this morning, Isaac pointed to the ceiling from the second story and said, "Hey Dad, what's that? Water just dripped on me." That was all it took to make Tony move faster than lightening. The next hour was a a flurry of, "GET ME FLASHLIGHT!!! I NEED A BUCKET!!!!! WHERE IS THAT FLASHLIGHT!!!!" Note to self, make a list of supplies that we MAY need in a hurricane and put them ALL together in ONE PLACE! I had all that stuff, but it was scattered all over the place. Not helpful. And my brain wasn't firing on all pistons at that moment either. Also not helpful.
Turns out, a venting pipe which goes out the roof of the house wasn't sealed properly, allowing water to seep down the sides of the pipe and down onto the ceiling. Fortunately we caught it early and it was a minor drip. It will also not take much to fix. No problem. I like high pressure situations in the morning-- wakes me up. You know I am not serious. The sad truth is, I have been secretly looking forward to Hanna's arrival for a couple days now. I knew she wasn't going to be strong enough to inflict real harm, but definitely mighty enough to cancel all our Saturday responsibilities.
The drippy ceiling was not our only injury. Our power never did go out, but did surge a few times-- again, early in the morning. Apparently, it got the best of our home computer. Tony can't get it to do anything but flash a blinking question mark at him. Hmmm... I don't think it is supposed to do that. We are going to take it to the Apple store tonight to have a diagnostic done on it. Fortunately, we have our computers covered as part of our USAA home owners policy and I am pretty sure we will get at least part of a new computer covered through them.

So, that is it for Hanna. It is gone. Quick mover, that Hanna is. Except now, I have no excuse for not doing a run this afternoon-- oh wait, yes I do. I have to have my computer "diagnosed". Besides, it's hot and sticky and still windy. And I'm on a low-mileage week, so I don't feel bad not running. Guess I'll have get back to business tomorrow.

In other Team Dragovich news, yesterday the boys and I were up at the crack of dawn driving to Spencer, NC. There is a pretty awesome Transportation Museum there and though it took us two hours to get there, it did NOT disappoint!! The boys had a FABULOUS time, learned a lot of fun NC Railroad history, and had LOTS of hands-on experiences-- of course, culminating in a REAL train ride on an old-fashioned passenger train. That wasn't their favorite part, however. Their favorite thing was playing Star Wars in the factory-turned-museum. They apparently turned the entire building into a Star Wars spaceship and ran from station to station turning knobs, pressing buttons, flipping switches and rooting out evil in-between the railroad cars. And in case your wondering what kind of mother lets her boys run wild in a train museum playing Star Wars... well, I could go to great lengths describing how the museum was really designed for such freedom of investigation- whether you are playing train conductor OR Star Wars... but, instead I'll simply say...I am that kind of mother :D

Before the train, came the canoe 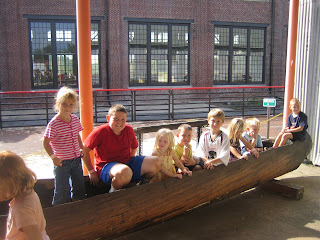 Can you imagine racing in this??? 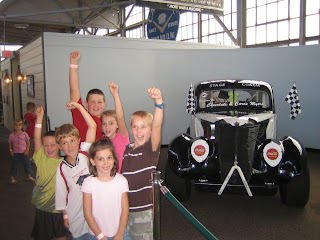 Wyatt and Isaac on the turntable... they aren't so sure yet. 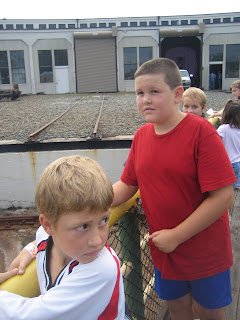 Climbin' on the caboose 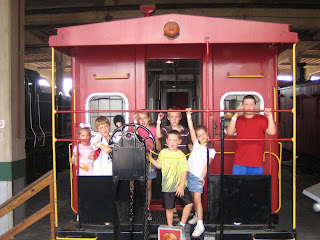 Getting on the Train 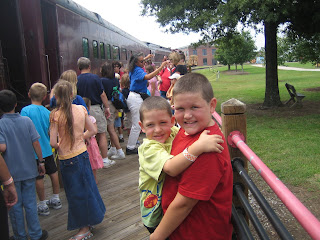 PS. BTW, we have been officially waiting over 3 months for our referral. Only 4-6 more to go ;)!! 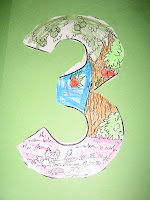 Posted by Team Dragovich at 1:58 PM

Sorry to hear that Hanna got you a little. :-/ We just got wet here.

The museum looks cool. I'll have to check it out.

ah, glad Hanna didn't do too much damage.
Igor wants to go to Spencer too! Once I mention to Rob the Star Wars building there will be TWO "boys" who will want to go.
xxoo
candy

I'm diggin' the haircuts! Spencer sounds like a lot of fun. Looking forward to seeing you and I have your watermelon bowl already in the van...

Hurricane Hanna. I think the name is fitting, don't you? Here in the Breton household, some of us were highly offended! So glad you didn't have TOO much damage.
Emily