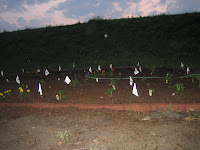 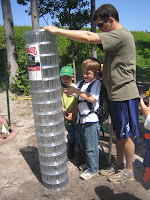 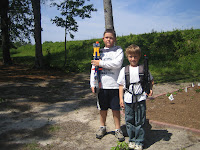 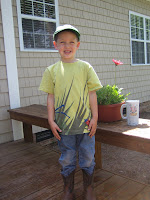 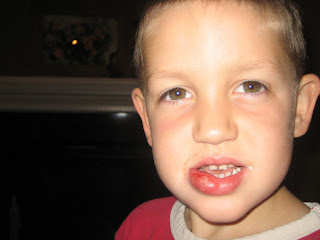 Yesterday was rough. It didn't start that way, but by mid-afternoon, I was emotionally, mentally and physically exhausted! I woke up to every bed in the house (except for mine, of course) peed in and wet sleepwear scattered all across the boys' carpets in their rooms. This is not so crazy or unusual, so I rolled with it. We started school and were pluggin' away, when I hear Sam scream from Wyatt's room. This is DEFINITELY not unusual, so I don't even look up from Isaac's Math book. Next thing I know Wyatt is ushering a screaming and bloody Sam into the homeschool room, looking as white as a ghost! For good reason, too-- when I DID finally decide to look up, there was blood everywhere; all over his shirt, drops trailing him on the floor and most importantly-- pouring out of his mouth like an open faucet! My exact words were... "Oh!" and that was it. I guess he and Wyatt were playing "sleeping bag wrestling" and Sam crashed against the ONLY piece of "furniture" in Wyatt's room. Of course, I rushed him to the bathroom and for the next several minutes worked only to stop the bleeding and determine its source. Isaac was crying (I later found out that he thought Sam was going to die), and Wyatt was talking non-stop (this is what he does when in distress). Sam was just slobbering and bleeding all over the place and I sort of checked out-- emotionally, anyway. Once the drama was over and all was well with Team Dragovich, Sam fell asleep, the boys and I finished school, worked on chores, and I slowly checked back in. Only when I did, it came to me in exhaustion, mixed with thanksgiving AND irritation-- weird, huh? Some days are filled with just too much body fluid!!!

Other than Sam drama, we have been enjoying a more laid back schedule. Soccer is over, and school will be over in a few weeks. I am already painting, re-arranging, and decorating rooms in my mind and sometimes looking too much at furniture on-line. The garden is up and growing pretty well--yea!! Adoption news is none, really... I have been following closely the families ahead of us-- those waiting, waiting, waiting for different things-- referrals, court dates, travel dates, etc. It looks like the wait times may be increasing again-- anything could happen, but the pattern is definitely moving in the "increase of wait times" direction. This is so hard to watch happen... yet, I have to always go back to God and His divine timing. There have been a couple comments made by families in our adoption Yahoo Group which have grabbed my attention and heart... one was about adoption being God's idea and design and when we enter into this eternal plan with Him, we have to expect that the enemy is going to be hard at work to oppose it-- YES!! I can see that-- and must be prepared to battle against schemes of Satan, who is trying hard to destroy this most beautiful relfection of God's love.
The other comment was made by a husband in the group, who so wisely comforted his wife as to why their court date didn't go through a second time... he said to remember that this would be the only time in their new daughter's life in which she would live in her native culture, surrounded by her native language, customs, nannies who love her, etc... this is not to say that their daughter would be better off staying in Ethiopia without a mother or father!! NOT AT ALL!!! But it is to say-- let God do His work in His perfect timing-- knowing that He IS at work, and EVERY day in EVERY way, He is molding and forming us and our children into unique and beautiful individuals created for His Glory; He will use ALL things to bring this about... and we can trust Him :)

Grace and Peace,
Shari
Posted by Team Dragovich at 6:54 AM

Gotta love a "seasoned" moma! Oh, yep blood, wash, not to deep, rest, and all is well to move on! :):) I LOVE IT!! Boys are so differant then girls! Praying you are DTE this week?
I am feeling the same with the wait times but trying to just give it over now and wait. We are about 34 out so, who knows!
love ya, Jori

Ouch, indeed! I'm sorry you had such a rough day. I'm praying that today is better.

Oooh, that busted lip had to hurt! Glad he was alright. Sorry you had a rough day.
Isn't it fun to see the garden growing!? I'm enjoying seeing ours grow too. :)
Tisha (awaa yg)