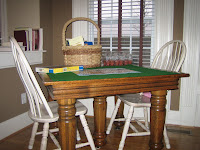 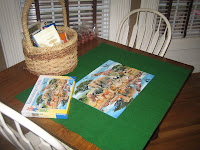 Yesterday evening on the way to soccer, the boys started bickering with one another. Usually, I am rolling my eyes and biting my tongue to keep from intervening and even sometimes breaking down and shutting off the fussiness before they have a chance to work it out-- I know, bad Mom. They are not big "car" arguers-- in fact, I would say we have more peace in our home than not (I am NOT talking about loudness or unruliness, just bickering)-- HOWEVER, we do have our little "seasons" of fussiness where all they seem to do is pick on each other. So, back to the car... they were bickering with one another and I have to say, it was the most HILARIOUS argument EVER!! I can't remember all the words used, but it was so civil and calm! Wyatt would say, "Isaac, could you please not move this guy's arm after I place it just how I want it?" Isaac-- "No." Wyatt-- "Isaac, could you PLEASE not move it. I worked really hard on it." Isaac-- "No." Wyatt-- "Isaac, you're so annoying." Isaac-- "Well... (pause), I don't care." On and on it went in similar fashion. Wyatt was using 98% of his vocabulary pool-- he has a LARGE vocabulary-- to express to Isaac his feelings and try to control Isaac with his words. Isaac, on the other hand, whose vocabulary is not nearly as large, but has a resolve that will knock your socks off, was tying Wyatt's tongue in knots by not saying much at all; rather flinging his darts of stubbornness for a direct hit.
This entire time, Tony and I are in the front seats doing everything we can to not bust out in hilarious laughter!!! I'm not kidding! We were turning our heads, biting our lips, covering our mouths, snickering under our breaths and coughing to keep from laughing at our two boys "go at it" in this most civilized way. Meanwhile, Sam is in the back seat feverishly looking for "slug bugs" and "PT Cruisers" (you know, the ole' "Slug Bug, No Return!" game in the car-- we added PT Cruisers to the mix) and every once in a while, in between insults, the voice of Sam yells out from the back seat of the van, "B-b-black PT Cruiser, NO PUNCH BACK!!!" as he slobbers and stutters all over himself just to get the words out! (there is no one in the back for him to "slug", by the way-- he just yells it out anyway).
The best part is that once we got to practice and everyone filed out of the car, it was as if they had held hands and sung "Kumbaya" the entire time!! Too much!! And then, as if my heart wasn't full enough from watching my three boys in action, Isaac walked up to me during the last part of Sam's practice and announced, "Mom, you know that in not so long from now, or maybe sort of long from now, we are going to have 7 people in our family. That is going to be fun!" I smiled and said, "What if we only have 6? What if we only get one baby instead of two, will that be okay?" "Yeah, I'll take 7 or 6. Both would be fun. One thing is for sure, we'll have even more people to help work on our puzzles!" (Isaac and I LOVE to puzzle. I currently have my mom's antique dining room table as our puzzle table and we just finished an African Safari puzzle by Ravensburger-- the colors are beautiful!) Now, if that didn't just burst my heart open, I don't think anything else could!! I LOVE MY BOYS :D

By the way, our social worker has our home study report finished. She emailed it to me yesterday to make some corrections. We got it done last night and shipped it back to her. She will send it to Duni for review, then send a copy off to USCIS, and we are one step closer to being done with our Dossier-- YEAH!!!!

Grace and Peace,
Shari
Posted by Team Dragovich at 6:43 AM

Oh, what a wonderful story!!!! You sound like such a great mom and your boys..........adorable. It is a special kinda-mom and dad who can find pleasure and joy in the "bickering" fights in the car. You are soooooo meant for more children. :) So great to hear your home study is finished. Congrats!!! Moving along, every day is a day closer.

Out of the mouths of babes...

Nice catching up with you. :)

Boys will be boys. The stuff they come up with. Now I have a mix of girls with it. I can not wait to hear them talking.
Lenka

thanks for your comments on my blog, and your prayers! I've got to stop thinking about tomorrow :)
apryl

Your boys sound so cute. That was such a funny story. :)
Tisha (awaa yg)