So hard to be JB 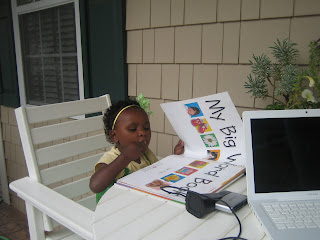 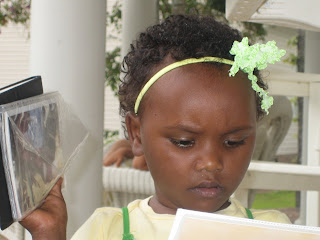 That is a pretty serious face! 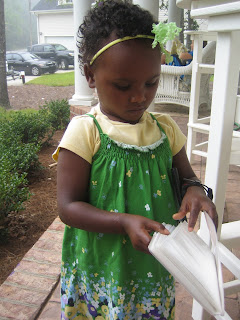 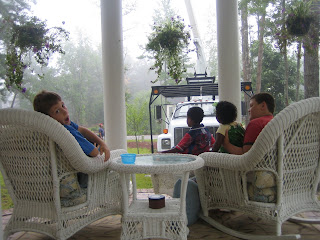 The tree cutting party this morning on our front porch 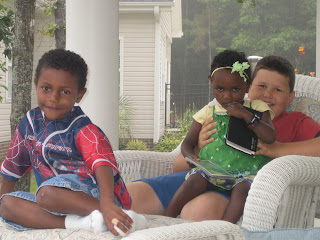 Three of my five cutie pies!!

Poor JB. He had a REALLY hard day today. Everything started fine, but by late this afternoon, he was terrified of the dog again, and full of tears over having to share the tricycle with his sister. His whole world has been just tipped over and spilled out all over half the world-- in front of everyone and he has no way of knowing how to make sense of it all. The worst part is, there isn't a whole lot I can do to "fix" it. In fact, I am the one (or one of the ones) who has helped make it sooo messy for him!

He doesn't seem to pick up on things as quickly as RiSa does. I swear she is understanding MOST of what I say to her- certainly she understands the obvious things and even the more subtle ideas-- like sharing and manners. JB-- not so much. And to make matters harder, he is having to deal with his older brothers try to talk to him and then quickly get frustrated that he doesn't respond to what they are telling him and then focus more of their attention on cute baby sister-- which is still beyond my comprehension. Today, he resorted to teasing them and sorta "picking" on them in order to keep their attention. The same kind of things he would do with RiSa at the guest house-- take her toy away that she would be playing with, copycat what she was saying, taunt her with something he knew she wasn't supposed to have or touch, etc. It's not that the boys don't try-- they do, but not for long, and certainly as soon as he doesn't share the toy of the moment they are whining at him and all fussy with him until they just decide to leave and go do something else. Now, every day hasn't been like this, but yesterday and today have been more and more.

Here is another issue. I know that in Ethiopia it is very culturally acceptable to feed one another and share off of one another's plates. I think that is very neat and I certainly don't have an issue with it-- except when I am trying to get my new kids to try and eat what is on THEIR plate and not go scavenging for everyone elses mashed potatoes after theirs is all gone. If I would let them, they would eat meat and starch forever and ever until they gorge themselves to death. Not cool. Especially RiSa. So... when she is done eating what she wants (the bread, pasta, potatoes) and asks for more I don't give it to her. I tell her to eat what is on her plate, then more. She gets it. Believe me. She pouts, and sniffs about and then looks at brother Biruk, who is all too willing to share what he has-- esp. if he doesn't really want it-- case in point with mashed potatoes tonight. Well, I wouldn't have it and this confused him. And tonight isn't the first time I've done it to him. It happens at one meal a day, at least- and once, I even caught him sneaking food to her. Bless his heart. That made me mad. I KNOW he is just doing what he has probably always done-- with her or any other kid sitting next to him. On one hand it is hard to stay firm when I know it is so confusing to him and frustrating, too. On the other hand, I can't let RiSa gorge herself on starch and carbs!!! And he needs to learn to try to eat a variety of foods, too! It's a hard one, and all I know to do is stay consistent and hope he doesn't resent me for it the rest of his life. :)

And you know the whole "breakthrough" with the dog? Well, forget it. I don't know WHAT happened (it was on Tony's watch!), but I guess Penny got frisky with JB and he pushed her away, which she took as a game and then went for the nipping of the leg. Yeah. Bad move, Pen-Pal. Tony said he tried to soothe his fears by "making him play fetch with Penny". Right... didn't work.

See what bright parents we are???? Ughhhh.

I know that most of what is happening in JB's little brain and heart right now is grieving. He is grieving his homeland, his caregivers, his friends, his language, his food, his culture, his people. This is my prayer-- that we would recognize his grief, enter into it with him and be able to love him through it. Not with our own love, but with the love of the Father who is able to give all comfort in all situations at all times.

PS... Hopefully I can remember tomorrow to post about our shopping adventure to the mall-- RiSa darted on me while in Stride Rite buying her and JB new tennis shoes... can you believe it?? I almost lost one of my new kids before I've even had her for a week! Ugh.
Posted by Team Dragovich at 10:12 PM

Shari,
You are so loving and understanding. Stay the course. Everything you are doing is in love, and he'll understand that over all other feelings. They are all lucky to have a mom as well tuned in as you are. Hang in there, and keep your good sense of humor for perpesctive!
I'm thinking of you!
Marcie

Love to see your kids home with you! I think about your sweet little girl often...our family loved meeting her in Addis.
Thinking of you and praying for you!

your writing is so real, and expressive. I feel like I'm RIGHT THERE w/ you and the fab 5.

You are SUCH a good mom. The fact that you are thinking about all the emotions and confusion and homesickness w/ JB is total proof that you were meant to be his, and RiSa's mommy.

So much going on for each of you. Lord, please be so real in each of these precious lives. I pray that these children will learn English quickly and blossom in relationship with their new brothers. You love them so much and have given them this precious gift of a new family, bond them all together, hearts tight. Unleash Your power here and Your Glory will be seen by all.